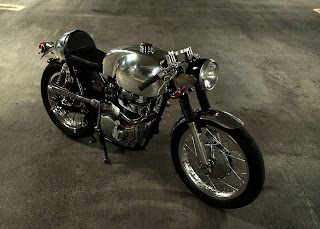 Roc City is a little shop that turns out really cool bikes every now and again.  While the spotlight shines on quick turnaround builds with bolt on parts and catchy release parties, the crew at Roc City keeps plugging away, burning the oil long into the night. 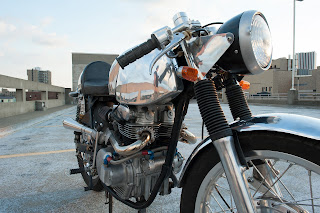 Every now and again, a bike comes out of the shop, with no fanfare, no banners, no instagramming or press kits.  We'd rather put that time into the bike, that's what makes Roc City unique. 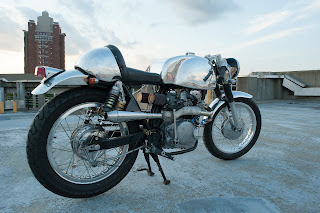 We build bikes for the joy of riding. 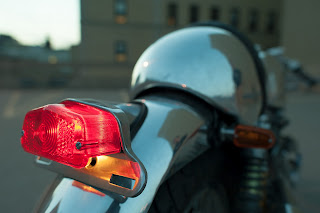 And our bikes fully express the joy we find in building.

Bike built by Sean at Roc City
Photos by Patrick at Patrickjstefano.com

I sometimes get the feeling that people who are into custom metalwork for their bikes or cars either think that making those parts is either extremely easy (I saw Jessie James build that tank with his English wheel!), or some sort of black magic. It's really neither, TV simplifies things too much, but working with sheet metal isn't anything more than a trade that isn't very common anymore, there's no magic to it at all. So I'm not revealing any secrets by showing how to make a pretty simple part, just doing a bit to preserve an old school skill.


So here's the step by step. 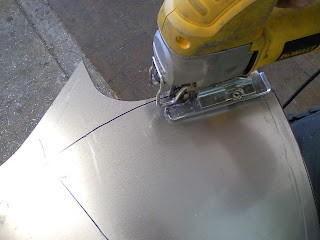 First I cut out a blank from some 14ga aluminum, I've worked out the shape over the years so I can make a seat just about the same size every time without having to trim much off at the end. 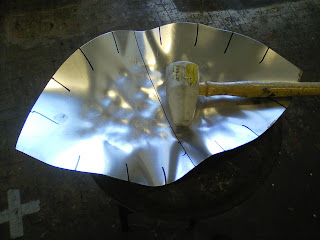 A cafe seat is typically just a hemisphere, which is really just a simple compound curve, there's a curve along the axis of the seat, and across the axis, a fender is really the same type of shape, just with one curve having a larger radius than the other! 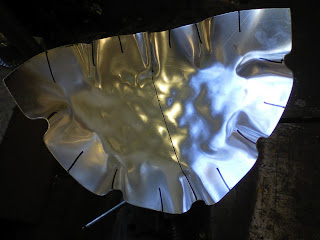 To start forming the sheet, the middle needs to be stretched out, stretching the metal makes it thinner, so it takes up more surface area, if its edges can't move, it has to pop out, so that's how you "dome" metal. 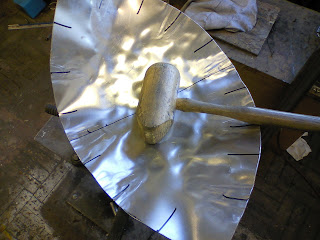 Since I don't want to only stretch the metal (it would get really stupidly thin if I did), I shrink the edges to bring out the doming of the middle more.  Shrinking actually makes the metal thicker, so it takes up less surface area, and tends to tuck in, so it pops any doming done to the sheet. 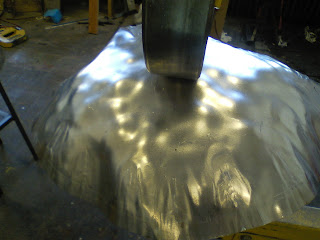 Shrinking is done by creating tucks at the edges, and then hammering them against an anvil, because of the shape of the tuck, the hammering actually gathers the metal together making it thicker, cool huh! 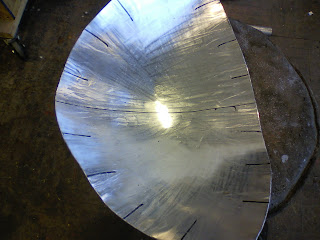 I use the English wheel mostly for small amounts of metal moving, it's a great tool for a specific job, it can dome metal, but not as fast as hammering, and it can't really shrink.  It's this that makes me chuckle a little when some TV show shows some metals guy making a tank (but only shows them using the wheel!). 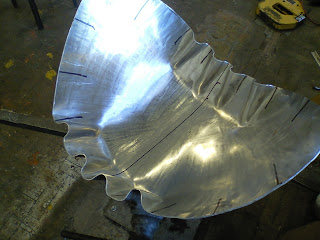 When the blank is shrunk and stretched a lot, it really needs to be wheeled to give it a smooth surface again, otherwise it's not really possible to keep stretching and shrinking efficiently. 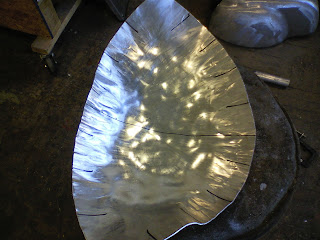 This would be a rough wheeling, there's not much focus on getting a really nice planished finish, but just to bring the surface into some regularity.  After this, the blank goes on to more shrinking and stretching, you can really see how much things can move! 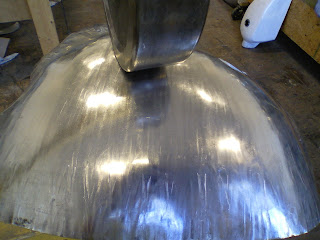 After a few rounds of back and forth between the tuck shrinker, wheel and shotbag, I switch over to a larger radius anvil for the wheel (as close to the natural radius of the blank as you can get without going larger).  It's with this setup and a constant light pressure that I planish the blank, it takes a lot of finesse and practice to get the blank really smooth and straight. 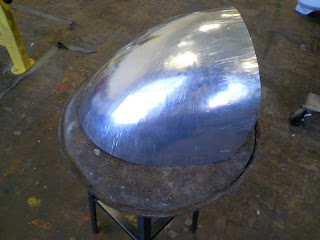 Now that the blank is formed, it's on to trimming to shape and building the rest of the seat! -I'll be posting that next.

Posted by roccitycafe at 6:42 PM No comments:

I had a chance to document how I make my stainless clipons by hand the other day, I get a lot of questions as to why they're better than the other import clipons all over the market so I figured I should show what goes into a set. 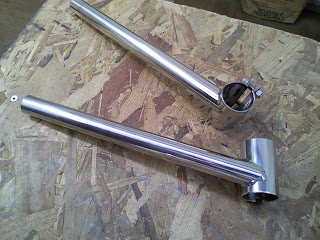 All polished up these are probably the nicest clipons out there, and the best deal for the money for sure, since they're 100% stainless, they're not going to rust through or have a layer of cheap chrome to flake off later, if they get dull, just polish them up and they'll look brand new. 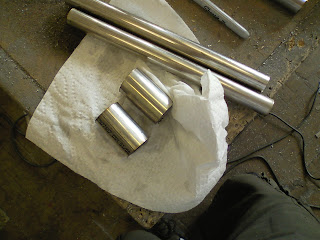 To start, I cut out the blank tube lengths, plus a little extra so I can turn the exposed ends on the lathe. I use 304 stainless, one of the more expensive and durable stainless grades around. 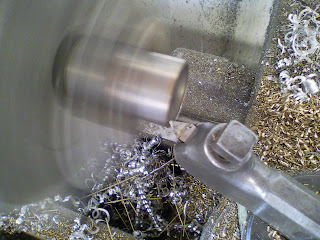 Like anything coming from the shop, these are each made by hand on tools that are at least 50 years old! There's something nice about using big old American chunks of iron to make things, they don't build 'em like they used to! 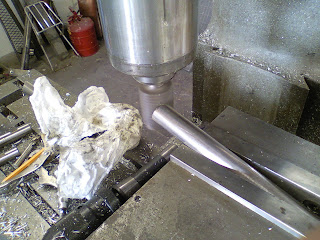 Each bar gets coped precisely to the clamp tube to guarantee a really strong weld and little or no distortion, none of the cheapo Chinese units are made this way, probably because it would take too much time. That's the beauty of products from little shops who actually take the time to do it right! 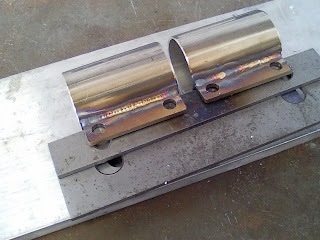 About the only modern tool in the shop is my Miller TIG, which I love to death, I don't know how else I'd put welds this pretty on things. The flanges were lasercut by a local shop who does excellent work, a flat flange spreads the clamping load a lot better than just welding a nut to the tube. Those welds would probably pass a nuclear plant test too, a bit overkill, but Hell, I'm picky! 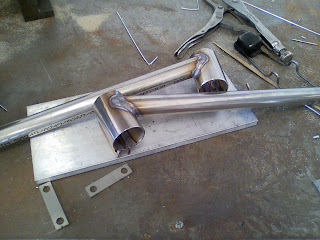 Welding the coped bars shows how the technique makes for a really clean consistent and super strong weld, I don't ever grind the welds down because I feel like they're a bit of art themselves.

I apply some heat tint remover to the welds, then polish the bars up and add on the stainless bolts and locknuts. Some people have asked me for details about how to route the bars for the control wiring, and with stainless it's really easy, you can use any grinding, filing or drilling tool as long as it hasn't been used on mild steel before. Since the bars are stainless, there's no need to worry about rust starting where they were drilled.

Check 'em out!
Posted by roccitycafe at 12:33 PM No comments:


I had a customer who ordered a Phoenix tank for his CB750 ask about installing an oil tank to replace the ugly stock unit, not completely knowing how much work it would be on this particular bike, I shot him a number and he told me to go ahead!  After fabricating the top half of the tank, I set about coming up with a way to fit 2-4 quarts of oil in there too. 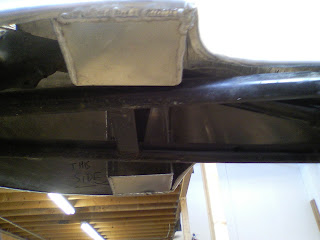 I had to build the tank in a big U shape to clear the backbone of the frame, so it would need two oil drains as well, otherwise one half would always stay unused.  Because I was building the tank on an empty frame, I never thought about clearance to the engine head... 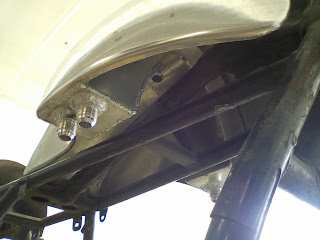 Turns out the oil feeds would need to be installed on the inside of the tank, and fitted with 90 degree connectors to route the lines back along the frame instead of just straight down. 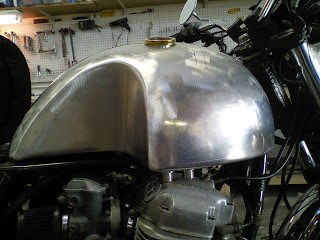 So I removed the weld in bungs and installed some custom machined ones where they'd fit best. 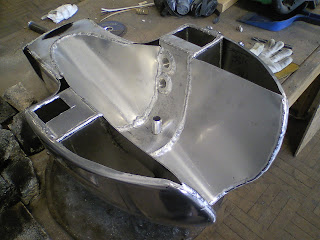 Then I finished up the bottom of the tank. 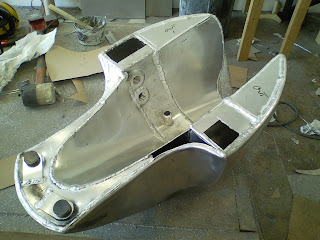 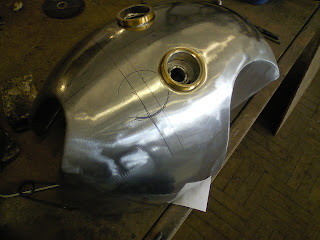 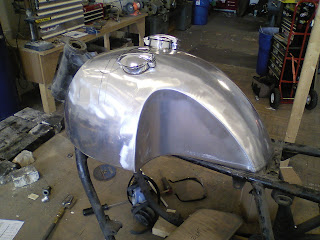 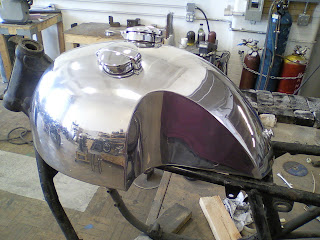 And then sanded and polished the tank... 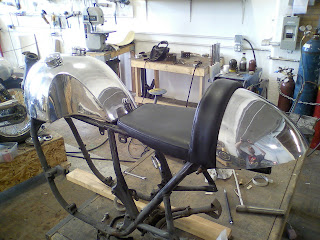 Then fitted the seat I also made for it.